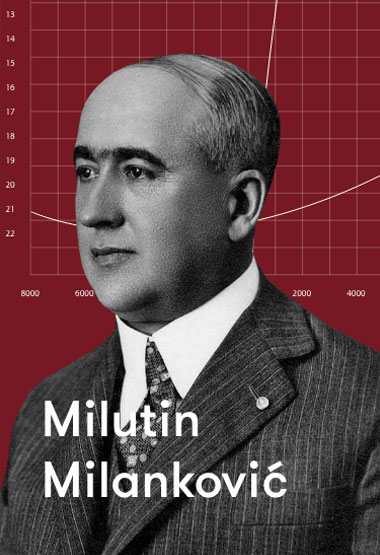 Milutin Milanković (28 May 1879 – 12 December 1958) was a geophysicist, mathematician, astronomer, climatologist who gave two fundamental contributions to global science. The first contribution is the "Canon of the Earth’s Insolation", which characterizes the climates of all the planets of the Solar system. This work and its application to the problem of ice age theory is classified in the category of the five most significant works of the 20th century. The second contribution is the explanation of Earth's long-term climate changes caused by changes in the position of the Earth in comparison to the Sun, now known as Milankovitch cycles. This explained the ice ages occurring in the geological past of the Earth, as well as the climate changes on the Earth which can be expected in the future.

Milutin Milanković is the creator of the most precise calendar so far.

Despite the fact that his recognizability and popularity never reached the size of one Nikola Tesla or Mihajlo Pupin, who gained their well-deserved fame primarily in the world, Milutin Milanković, who did his scientific work in a room in Kapetan Miša's building at Belgrade University, is the most quoted and one of the most recognized Serbian scientists in the world.