Serbia is conquering the Middle East with its technology 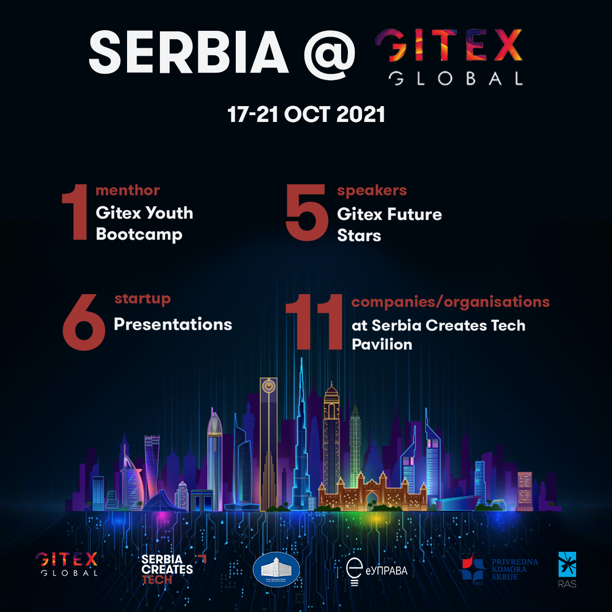 As part of a broader appearance at the World Expo 2020 Dubai, Serbia will present itself for the first time at GITEX which has grown this year to become the largest technological event in in the Middle East and North Africa region (MENA) and in the world in general. The event will be held from October 17 to 21 in Dubai.

“GITEX brings together global leaders from the high-tech industry, startups and innovators who are changing the world and therefore this event represents a great opportunity for Serbia to show its innovations in the field of digital technology and introduce its own experts who stand side by side with experts from the world’s most developed countries. This is the first time that Serbia participates in such a strategic and organized way in such a major technological event, simultaneously and in coordination with its appearance at EXPO 2020 Dubai. Serbia will conquer the Middle East with its technology ", said Ana Ilić, Senior Advisor to the Prime Minister and Deputy Commissioner General of Serbia for Expo Dubai 2020.

With our comprehensive presentation at Gitex, we will show why we are called "Silicon Valley of the Balkans", how we have become leaders in the field of blockchain technology and a center of highly educated talent, but also why it is important that we have a special Strategy for development of artificial intelligence as one of the very few countries in Europe and the world.

"We will present Serbia to the world as a country of creativity, innovation and engineering excellence, where global companies are opening their development centers, and local companies are creating globally successful solutions. We will present a country where artificial intelligence is studied in primary school, and where the eight-graders are already trained in programming. A country that has the largest and most modern data center in this part of the world and where the digitalization of administration has become a national pride. At the same time, we will make available to our innovative companies and startups all our contacts from the United Arab Emirates and the Middle East, global companies and investors, and thus invest in their success, " said Marta Arsovska Tomovska, Director in the Prime Minister's Office, and one of our five panellists at global conferences held as part of GITEX.

In addition to Tomovska, Mihailo Jovanović, director of the Office for Information Technologies and eGovernment, Nenad Paunović, director of the IT and Entrepreneurship Team in the Office of the Prime Minister of the Republic of Serbia, as well as Ivan Bjelajac and Vladimir Crnojević directors of our companies in the field of blockchain technology and artificial intelligence will also participate in specialized conferences on topics: smart cities, innovation ecosystem and incentives, artificial intelligence in agriculture and blockchain, where they will exchange opinions and experiences in the field of highly developed technologies and achievements with colleagues from other countries.

"GITEX will be a unique opportunity to present BioSense Institute on the big international stage with its innovative solutions in the field of application of information technologies in agriculture and food production. GITEX is an extremely important event and one of the largest of its kind in the world, where the most important achievements in the world of information technology are presented. It is now held in the United Arab Emirates where there is significant awareness of food shortages in the future and the need to invest in modern food production. Therefore, I believe that this is the right place for the BioSense Institute to present its results and research in cooperation with industry, undertaken with the aim to provide food for the growing global population in the future," said Vladimir Crnojević, director of BioSense Institute.

As part of the Serbian appearance, “Petlja” Foundation, established with the aim of improving algorithmic literacy in Serbia, will hold a lecture on Python/Pygame for the 240 best high school students from the Emirates.

For the first time, the Government of the Republic of Serbia will also present selected startups from our country at GITEX Future Stars 2021 - the largest event dedicated to the development of startups in the Middle East, North Africa and South Asia, which is held as part of the GITEX conference.

Domestic companies that will represent Serbia at GITEX Future Stars are: "Joberty Technologies", "Kredium", "White Lemur", "Stock Studio", "VizLore Digital Asset Management" and "Deep Blue Sea Studio". The selected companies come from the fields of social networks, FinTech, artificial intelligence, environmental protection and corporate software. All startups have the opportunity to apply for the "Supernova Challenge", where the best will be awarded with as much as 200,000 dollars.

“Bearing in mind that the world's largest IT companies, investment funds and investors have traditionally confirmed their participation in this global event, as well as that the organizers are announcing a gathering of more than 750 startups from 75 countries to present 400 VC funds and investors from more than 30 countries, we consider the appearance of Serbian companies at GFS and GITEX as an investment in the development of the domestic startup scene”, Ilić points out.

Support for Serbia's participation in GITEX is provided by the Office of the Prime Minister of the Republic of Serbia, Serbian Chamber of Commerce and Industry and the Serbian Development Agency, which will present the advantages and opportunities for investing in our country on a daily basis.