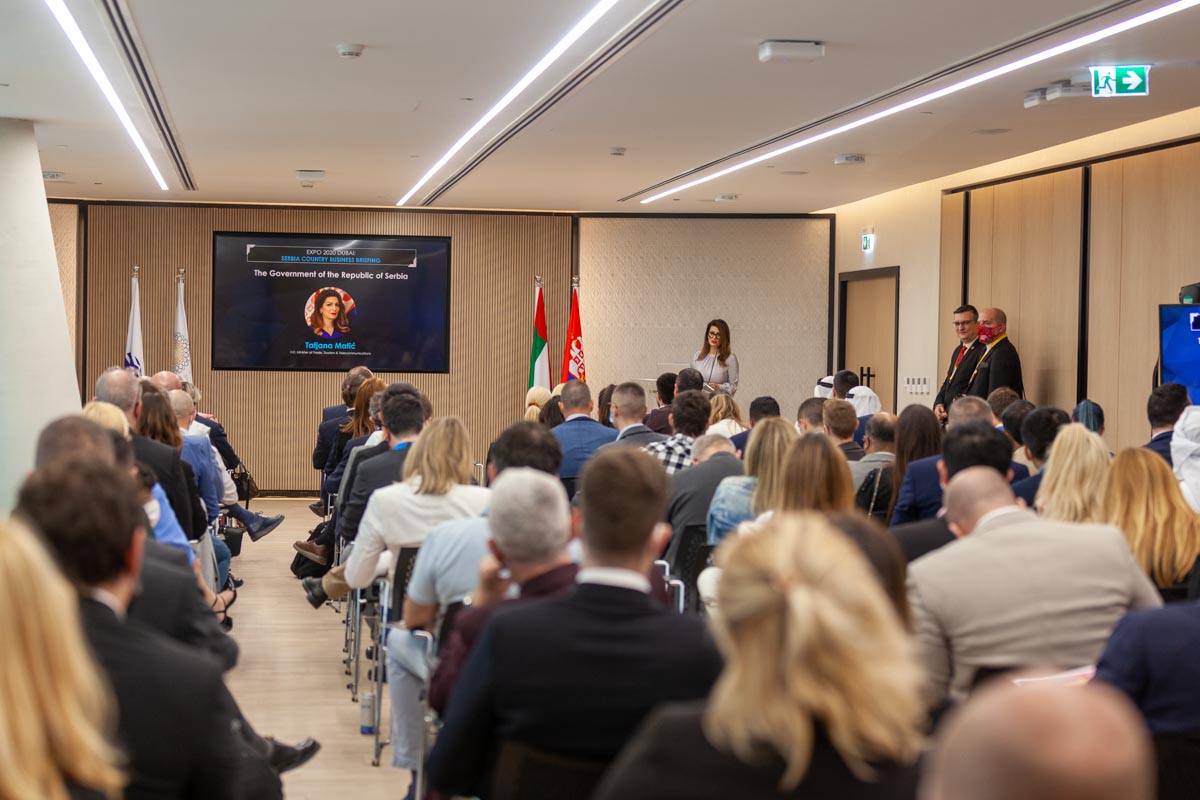 The agri-food industry, ICT technologies and biotechnology represent the segments of the Serbian economy with the greatest potential for development and further investments, as evidenced by the results shown by these industries in terms of exports and successes in creating innovations – concluded the participants of today's special business conference "Serbia Country Business Briefing” organized by the Government of the Republic of Serbia, the Development Agency of Serbia, the Serbian Chamber of Commerce and the entire Serbia Expo team on the occasion of marking the Statehood Day of the Republic of Serbia at the World Expo 2020 in Dubai.

The investment and business event as part of the celebration of the National Day of Serbia at the Expo 2020 Dubai was officially opened by the Commissioner General of the Republic of Serbia for the Expo and the Minister of Trade, Tourism and Telecommunications Tatjana Matić. She pointed out that with a total of 4 billion gross exports, the agricultural and food industries represent the segment with the largest gross exports of the country, with constant growth and the greatest potential for further growth. "Serbia is among the top five countries in the world in the production of raspberries, plums and cherries; in Europe we are in the top five in the production of blueberries, strawberries, blackberries, soybeans and corn, and in the top 10 European exporters of corn and sunflowers. "By investing in our food and agricultural industry, primarily in its processing component, investors have the opportunity to reach a market of 1.3 billion consumers thanks to existing free and preferential trade agreements with numerous markets," Matić said.

In addition to RAS representatives, among other participants at the conference were Nenad Paunović, Director of the IT and Entrepreneurship Team in the Prime Minister's Office, Nebojša Bjelotomić, Director General of the Digital Serbia Initiative, Dr. Jelena Begović, Director of the Institute of Molecular Genetics and Genetic Engineering, Dr. Aleksandar Ljubić from Vincula Biotech Group, Marko Majstorović Advisor to the Minister of Agriculture and Saša Stanić Director of Stanić do.o. and H&S Fruits.

Traditionally the most important lever in the Serbian economy, the food industry and agriculture have a vital role in domestic consumption and exports, and now the goal is to attract new investments in the processing industry in Serbia to create more complex products, achieve greater added value and establish vertical integration - from raw materials, all the way to the most complex types of processing and production in the sector.

Serbia is a leader in the Western Balkans when it comes to food production, and there is a large room for investments in the processing industry, especially due to the fact that our country has a huge raw material base – as pointed out the representatives of the Ministry of Agriculture, Forestry and Water Management at the „Serbia Country Business Briefing“ event.

"Today at the Expo we had a large number of meetings with representatives of companies from various fields of processing, who expressed great and genuine interest. Multiple types of cooperation were discussed, from the purchase and distribution of Serbian products, through joint investments in new projects with Serbian companies, to the start of production in Serbia and investments in new factories in the food industry. Foreign companies from the processing industry recognize Serbia as an excellent export platform for larger markets such as the EU and Russia," said Marko Majstorović, from the Office of the Minister of Agriculture, Forestry and Water Management.

"Information and communication technologies (ICT) represent the largest net export branch of Serbia and a strategically important industry at the national level. Only in the last four years, this branch of industry in Serbia has doubled its exports," said Nenad Paunović, director of the IT and Entrepreneurship Team in the Prime Minister's Office. He added that very good results in this sector have been achieved thanks to the exceptional quality of the domestic ICT sector, the growing number of successful startups, but also owing to large foreign investments, which have exceeded a billion dollars in this sector in recent years.

Dr. Jelena Begovic, Director of the Institute of Molecular Genetics and Genetic Engineering, spoke at the conference about how Serbia follows the latest trends in biotechnology and science. She presented the national project "BIO4 Campus" which implies the construction of a unique technological campus in Serbia where institutes, faculties, startups and leading world companies will be engaged in research and development in the fields of biomedicine, biotechnology, bioinformatics and biodiversity and innovation in these segments. "BIO4 Campus" is Serbia’s unique response to the unstoppable development of science and technology and connecting artificial intelligence, robotics, the Internet of Things with nanotechnology, biomedicine, biotechnology, and the Campus represents an effort to concentrate knowledge, ideas and infrastructure in one place, and put Serbia on the world map in terms of research and development ” explained Dr. Jelena Begović.

Professor Dr. Aleksandar Ljubić, co-owner of Vincula Biotech Group, presented his company which, using the latest scientific achievements in the field of cell and gene therapies, aspires to become a global leader in the field of biotechnology. "Vincula Biotech Group is the first comprehensive biotechnological ecosystem in Europe, which connects the field of research and development, production and services, as well as the application of medical protocols, thus achieving a shorter development cycle of innovative therapies to positively affect patient treatment and quality of life." , said Dr. Ljubić.

After the conference, numerous special sessions were held with investors interested in investing in the agri-food industry, ICT sector and biotechnology.

Panel on the development path of the Serbian IT industry

As part of the investment conference, a panel discussion was held on the development path of the Serbian economy from traditional sectors to the current position of a leader in the region and the world when it comes to modern technologies, digitalization and innovation. Milan Dobrijević, State Secretary at the Ministry of Trade, Tourism and Telecommunications, Ana Ilić, Senior Adviser to the Prime Minister of Serbia for Creative Industries and Tourism and Deputy Commissioner General of Serbia for EXPO 2020 Dubai, Ana Šarenac, Assistant Director of the Office for IT and eGovernment in the Government of Serbia, Nebojša Bjelotomić, Director General of the Digital Initiative of Serbia and Vladimir Crnojević, Director General of the Biosense Institute, spoke at the panel "Serbia Creates Tech: From Raspberries to Metaverse" The discussion was moderated by Marta Arsovska-Tomovska, Director of the Public Administration and eGovernment Reform Team in the Prime Minister's Office.

The panelists emphasized that Serbia has only in the last few years created an ecosystem in which IT technologies which drive the domestic economy and dominate it when it comes to share in the country's net exports, experience a great boom, with all other segments of the economy beginning to rely their growth ambitions on technologically advanced solutions and technological innovations.

Web3 and blockchain, development of the gaming industry, connection of medicine and technological innovations, biotechnology, but also agri-technologies, are some of the leading segments of innovations in Serbia that promise the greatest success in the future, the panel concluded. It was also pointed out that by investing in digital infrastructure, Serbia is proving to be the region’s leader in the most sophisticated technologies, which is best evidenced by the existence of the state Data Center - the most modern in this part of Europe, whose clients are large global companies such as Oracle and G42, with whom a cooperation agreement was signed at today's Serbian business event. 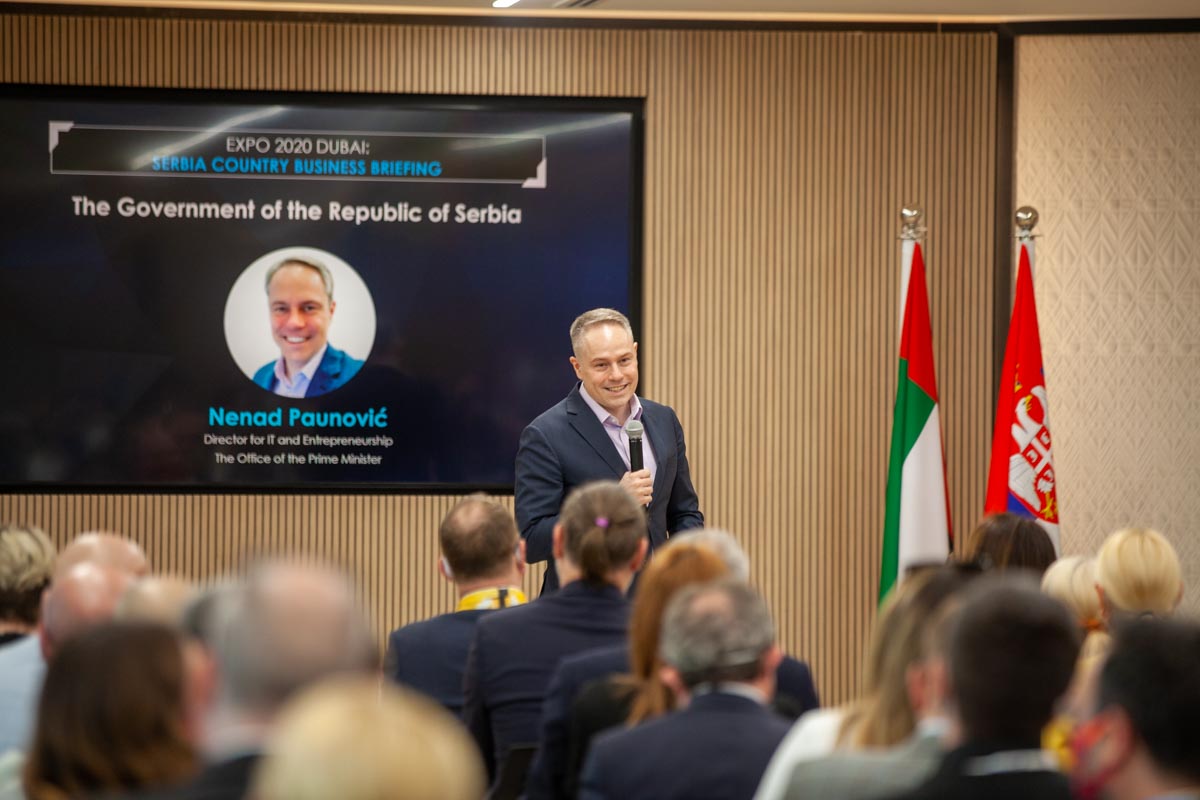 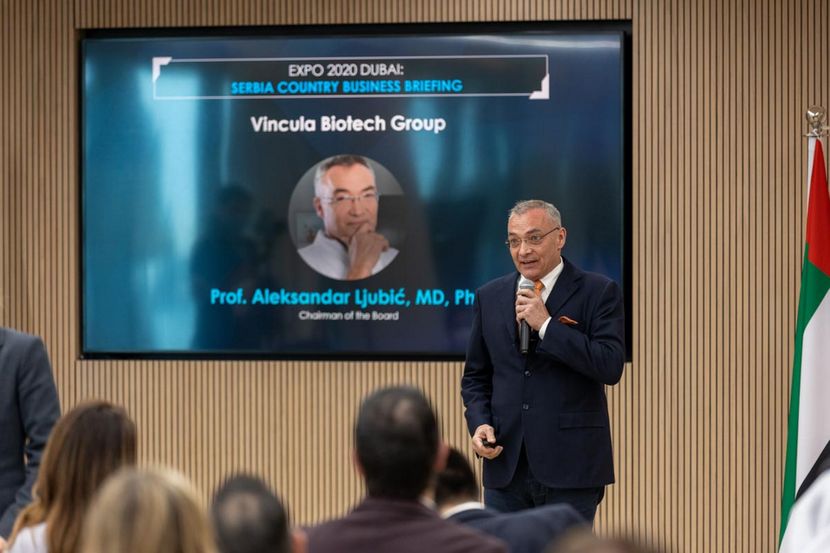 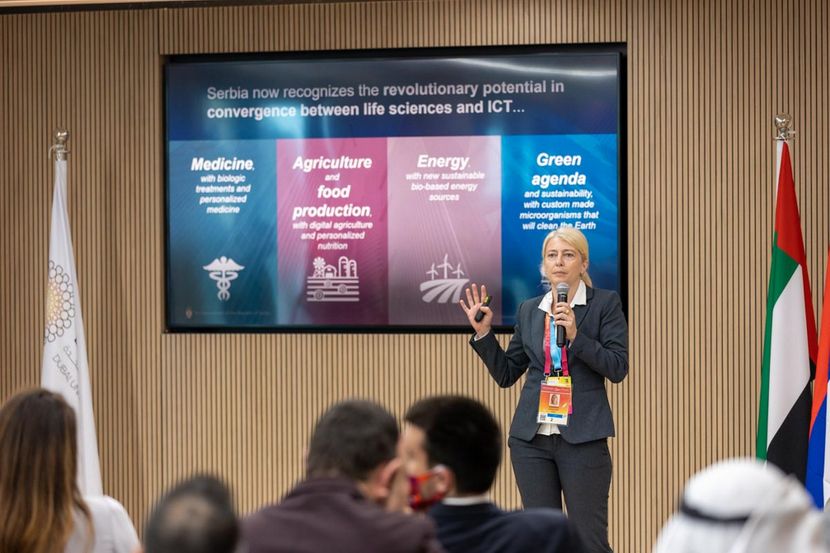 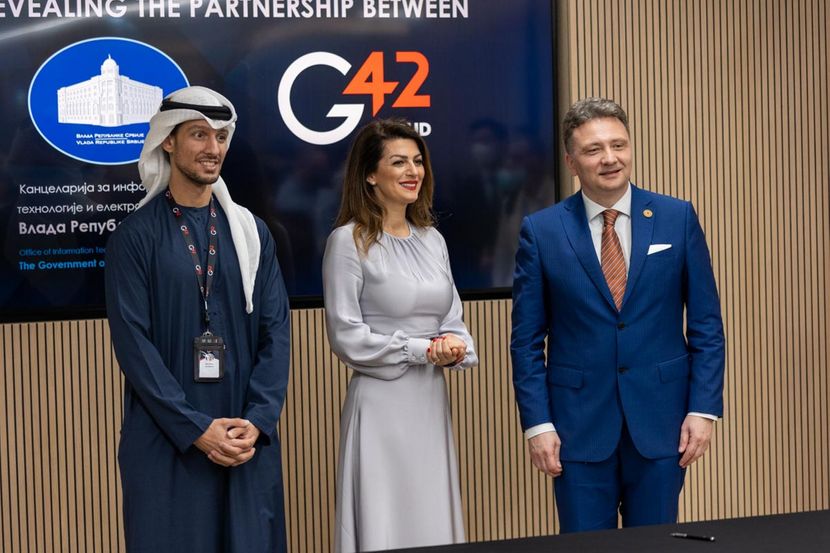