According to President Vucic, the organization of the World Exhibition is impeccable, and it can be stated with a great deal of objectivity that it is the lastest in a series of confirmations of the high reputation that the United Arab Emirates is gaining around the world through a wise policy of peace.

"Our two countries are bound by a sincere, strategic friendship, and I consider the development of relations between Serbia and the Emirates to be one of the basic guidelines of my foreign policy." Today, joint projects of our countries contribute to the economic development of Serbia and give our economy a big boost. "I hope that our partners from the United Arab Emirates are equally satisfied with that cooperation," Vucic said.

Thanks to comprehensive socio-economic measures and strategies, Serbia, as he said, has become the fastest growing economy in the region, characterized by an accelerated inflow of foreign investments and an increase in the volume of trade.

Vucic also referred to several important indicators of the development and progress of our country:

"Serbia had one of the most stable economies in Europe in 2020. According to our estimates, economic growth will amount to seven percent by the end of the current year, while based on the IMF estimate, GDP growth will amount to six percent. “In 2020, our country managed to attract 62 percent of the total volume of foreign investments in the entire region," Vucic pointed out.

The Pavilion was opened with a performance from vocal soloist Danica Krstić and a multimedia performance inspired by Neolithic Vinča culture, and whose main actor is the ballet artist Dejan Kolarov.

The imposing Pavilion of the Republic of Serbia at "EXPO Dubai 2020" was officially opened with a symbolic transmission of the spark of creativity and innovation that began in our area and has been continuously transmitted for 7,000 years, from the time of the revolutionary Vinca culture to Serbia's creators and innovators today. This inspires the themes and messages of the Serbia Pavilion at EXPO Dubai 2020.

"By presenting at the World Exhibition, we want to open new opportunities for Serbia's development through networking with key actors of the global business community, and to present our country as a stable investment destination which, under the leadership of President Aleksandar Vucic, has been recognised as "the fastest growing economy in the Western Balkans, the top European destination for foreign investments, among the first in the development of the IT sector globally, and a leader in the region when it comes to digitalization," said Minister of Trade, Tourism and Telecommunications Tatjana Matic, Commissioner General of Serbia's performance at" EXPO Dubai 2020 ".

The opening of the first World Expo in the Arab world on the previous day, with a spectacular opening ceremony featuring some of the world's biggest stars such including Ellie Goulding, Andrea Bocceli, Lang Lang, Andra Day and many others. The opening night left the attendees breathless and wrote a new page in the history books for World Exhibitions.

Matic congratulated the hosts on the extremely high standards in the organization of the largest event in world history, for which as many as 25 million visitors are expected.

Friendly relations between the Republic of Serbia and the UAE are based on fruitful and long-term political and economic cooperation. The fact that Serbia Pavilion, with a total area of almost 2000 m2, is located in one of the most prominent locations of the exhibition not only confirms the closeness of our two countries but is also an additional opportunity to strengthen these relations.

Matic added that the Pavilion is fully digitalized and provides the possibility of a virtual journey through different realities, different time periods and different spaces, and that Serbia will present itself as an innovative and creative country by performing at the World Exhibition.

Serbia's appearance at "EXPO 2020 Dubai" was realized in cooperation with the Cabinet of the Prime Minister of the Republic of Serbia and the platform Serbia Creates, the Serbian Chamber of Commerce and the Development Agency of Serbia

The world exhibition "EXPO 2020 Dubai" will run from October 1, 2021 to March 31, 2022, under the slogan "Connecting Minds, Creating the Future". During the six months of the exhibition Serbia will present various economic sectors, scientific content, technological innovations, creative industries, tourism and over 150 events and activations under the slogan "Serbia Creates Ideas - Inspired by the Past, Shaping the Future" in order to position the country as a modern, innovative nation that is attractive for the development of trade and tourism. 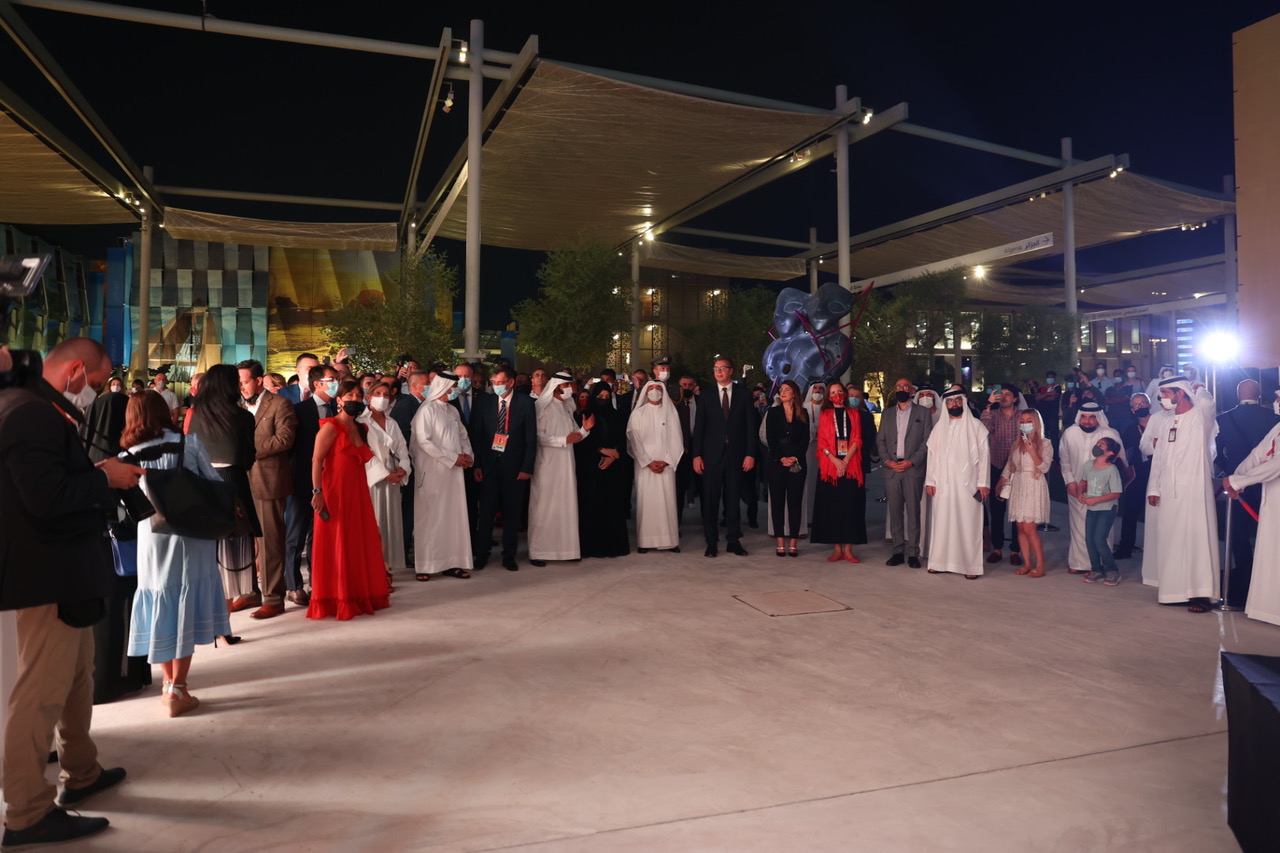